It has been four days now since I, Neil Rankin, landed on this little planet known as Mercury, the closest one can get to the sun without catching aflame. At first I thought I would need my spacesuit to survive on this terrain made up of espresso and milk, how peculiar it was to discover that I needed no oxygen tank to breathe in this climate.

I find the habitants to be most friendly and very approachable (which is a giant step for mankind compared to the last planet I found myself on). Upon leaving the bubble of my Foxfire space shuttle I encountered a remarkable being known as Alex Tran, he showed me how to use the natural resources of his home planet. I have not been the same since.

Knowing now that I can live off of what this planet has to offer I'm sure I will find myself very happy indeed. I think I'll stay awhile. I look forward to meeting all of Mercury's other inhabitants and realizing the full potential of the planet Mercury. 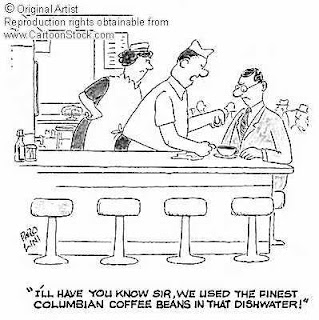 
hey sports fans! If you come in and see a new face behind the counter it might just be Mr.Neil Rankin!
Do you know Neil Rankin?
If not, here is your chance!

In other news...
Beans Beans Beans
I'm really keen for these beans.
The Mad Hatter Blend- The best cure for your AM blues! It's got a little extra kick to get your morning started. Think about it... After a cup of that stuff you could look and feel as great as Alice Berg! ooohh baby!
Quick Silver- It's like Ben, but in bean form. Awake but not crazy, not too in your face, and super eco friendly. Great anytime, anywhere.
Espresso- Great as a brew, perfect as an espresso. It's like when Adrian found $20.00 in the street and took me out for ice cream.
Decaf (swp)- Best decaf around! It's like missing a party for a great night of sleep. Sure the party might be fun (especially if I'm there), But sleep is so RAD!
Extra Butter- It's dark, it's rich, and it's awesome. The guy upstairs buys it all the time. I'm Sold!
Ethiopia Yirgacheffe- It's sweet, a bit fruity, and a staff favourite. Great after a meal.

OK, one parting gift. In honour of our new Quicksilver blend, I give you vintage Kevin Bacon in a film of the same title:
http://www.youtube.com/watch?v=GWOCxj_qvoI
Posted by Mercury Espresso Bar at 8/26/2007 11:29:00 a.m. No comments:

It is with a heavy heart that I, Nicholas Brown, pen this blog on my last day of employment at the Merc. I'm moving on, but my heart remains with this beacon of light in the burgeoning Toronto coffee scene. It's been about a year since I moved here from Vancouver, and I'm happy to say that this young shop has made a huge impact in a city where orders of "expresso" are still a regular phenomenon (though not here-- our customers are a cut above).

I may live in Parkdale, but I'll still be making the regular bike ride across Lakeshore to visit, sip a cappuccino and stoop it (that is, until Winter rears its ugly head).

Today Mercury Espresso Bar welcomes young Damien Zielinski to the fold- the latest in a hallowed lineage of lucky employees. He was reportedly heard to remark "this is, perhaps, the greatest day of my young life." With unstoppable vigour and an enthusiasm impossible to deny, he has surely embarked on a life-changing and irreversible transformation process.

"I used to work for a Starbucks on campus," said Zielinski, 25, "and you better believe it was a different scene. When you're used to serving McEspresso to University of Toronto slaves all day on behalf of a multi-national corporation, it's amazingly refreshing to begin serving a product you believe in to people you respect (and on behalf of people you respect). I look forward to approaching Mercury's Elektra with an attitude of humility, diligence, reverence, and love that will hopefully manifest itself in delicious shot after delicious shot of organic Fair Trade espresso. I take this position and the positivity that it allows me to spread in the Leslieville community very seriously, and plan on working very, very hard."
Posted by Mercury Espresso Bar at 8/22/2007 06:56:00 p.m. No comments:

Back when the Hudson's Bay Company (a private business) owned most of Canada and 'venture capital' was counted in beaver pelts, suffering for fashion was an everyday business. All those beavers found their way, eventually, into hats-- fuzzy, felted top hats. It took a special kind of hatter to process the pelts, to remove the hard, spiny hairs using mercury-- a toxic element-- day after day after day. As we now know, mercury (the element) is something that we don't want to have too close or prolonged contact with (I'm contrasting this, of course, with the establishment of the same name whose blog you are perusing, where you want to be all the time, obviously.)

The long-term effects of mercury were known back then but tolerated due to the lack of any other effective way of treating the furs. Those few who practiced this process slowly started to show the symptoms of mercury poisoning: drooling, sweating, and general dementia. They are best remembered in Lewis Carroll's Alice in Wonderland, in the form of the Mad Hatter.

But humanity has had a much longer relationship with mercury due to its perceived magical properties, which were readily seen in its liquid state at room temperature. Alchemists prized this integral tool, using it liberally in their studies of transmutation, and quacks dosed their patients with this miracle cure, the solution to all cases of syphilis, cancer, mumps, flu, plague, pox, ticks, lice, demon possession, and general wifely disagreeability. This was the power of Quicksilver.
Posted by Mercury Espresso Bar at 8/20/2007 09:28:00 a.m. No comments:

Hey, it's a darn good day for a good ol' cup of espresso. Y'all should try it in a ceramic cup, considering paper ain't all that great of a seasoning.

Hi. Did you miss me?

Taste of the Danforth is in full effect this weekend leaving Leslieville a desolate wasteland. Well, wasteland is kind of an exaggeration but that IS the theme of this blog.

We've got a Mexico Oaxaca Sierra Madre Del Sur for our Featured Latte. It makes me feel like wearing a poncho. No one can be in a bad mood while wearing a poncho. I was thinking of getting sombrero too. Imagine that! Having a sombrero/poncho combo, I'd be off my tits in happiness!

Mercury is also out on the hunt for a few good baristas. If you know anyone who has prior espresso bar experience we'd be happy to meet them!

Ghostface Killah is blasting from the stereo right now and Doug and I agree that he's the best Wu-Tang member. If Doug was a member it would be him. I think I would be Redman. Which member would you be? Ten points for anyone owning up to be ODB!